Priority: Enhancement
Current State: Closed
Released In: 2.0.0
Target Release: major
Applies To: Extension
Component: PatternSkin
Branches: Release01x01 trunk
Reported By: ArthurClemens
Waiting For:
Last Change By: MichaelTempest
This bug item was triggered by changes in Item12178. Changes: -- ArthurClemens - 25 Oct 2012 Yea, I was planning to "improve typography" of PatternSkin. But I won't given the recent debate.

Btw you broke: -- MichaelDaum - 26 Oct 2012 I've included your improvement of formsteps, and I have explained my reluctance in implementing. This task is proof of my effort in collaboration. -- ArthurClemens - 26 Oct 2012 And why the heck are you calling your changes: Fixes and enhancements after "improve typography" changes even though your massive changes have nothing to do with my previous checkins in most of the cases, i.e. wrt buttons? This is totally annoying given the release timeline. -- MichaelDaum - 26 Oct 2012 I understand you are upset. And I agree that the topic title could be seen as blaming - which was not intended. I will dive into the newly introduced bugs. -- ArthurClemens - 26 Oct 2012 Note: change Helvetica to Arial. Done -- ArthurClemens - 26 Oct 2012 Buttons in nat edit plugin are broken because of styles in NatEditPlugin/default/styles.css. It looks like it implements its own variant of jqButton, which is not necessary because the links also have class jqButton. If I comment out these lines: and add the buttons look as expected, and also the hiding works again. About defining a.jqButton instead of just .jqButton - this happens in jquery.button.css as well, and without it, the buttons get blue text. I haven't found the issue about foswikiRight. It would be helpful if you could indicate where this happens. -- ArthurClemens - 26 Oct 2012 Tested in IE7: the display:inline-block hack works, so floats are not necessary anymore. -- ArthurClemens - 27 Oct 2012 There still seems to be a more generic problem: jqButtons inside a twisty are still broken. See http://trunk.foswiki.org/Sandbox/WebHome -- MichaelDaum - 28 Oct 2012 Tested on IE7, IE8, IE9, Chrome, Safari on Mountain Lion. They all look fine. What is wrong? -- ArthurClemens - 28 Oct 2012

This is how the twisty button looks like using Chrome. Clearing the browser cache did not help. Firefox is okay. Turns out that this is an ordering problem between jquery.button.css and pattern's styles: they rearrange randomly. So there's a missing dependency. -- MichaelDaum - 28 Oct 2012 This is what I see: For testing I use http://www.browserstack.com/. Please provide some more details on Chrome version and OS. -- ArthurClemens - 28 Oct 2012 Not a browser problem. The issue is that there are two competing rules for .jqButton span, one adding a background image, the other removing it. The one coming first in linear order has got less precedence. There are three ways to resolve this: either add a dependency to any ADDTOZONE requiring JQUERYPLUGIN::BUTTON. This will properly arrange the different css files in the html header. The other way to resolve is to move the new button css to PatternSkin's own jquery-ui theme. The theme files will always be arranged properly no matter what. Third way: prefix the PatternSkin specific rules with a patternXXX class, e.g. #patternScreen .jqButton span. That way you don't have to worry about linear ordering and dependencies. However sub-skins of PatternSkin will have a harder time. -- MichaelDaum - 28 Oct 2012 I will try the second option first. Still I wonder why I don't see the background image from the span, that you've screenshotted. -- ArthurClemens - 28 Oct 2012 That's probably best as you will also be able to align the other jquery-ui look and feel to your new button style. -- MichaelDaum - 28 Oct 2012 jqButton styles are now in jquery-ui. Now we need to settle the handling of buttons on the nat edit screen (see above). -- ArthurClemens - 28 Oct 2012 Yes, the local jqButton version in NatEditPlugin should go away. I'll also deprecate NATEDIT_THEME now that we've got jquery-ui themes. There are still some issues I see with the latest PatternSkin changes: I'll attach a screenshot illustrating the problems. 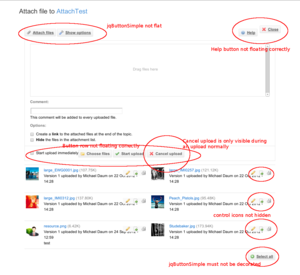 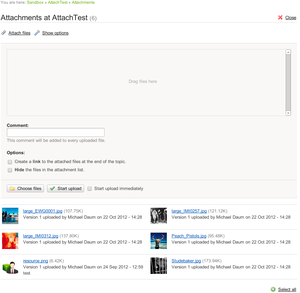 -- MichaelDaum - 29 Oct 2012 Strange I had to tripple check to get your new pattern jquery-ui theme updates. Added

to those bug reports that I see fixed now. Alas I've found some more errors: This change fixes the layout and hiding problems with your new buttons again: -- MichaelDaum - 29 Oct 2012 It would be useful if jqButton and foswikiButton are similar in use, and if it would be possible to put a button next to a form field without using float for both. You understand I favor inline-block if possible. Note that the mis-alignment of the close button in TopicInteractionPlugin is caused by the new style of foswikiFormSteps, so unrelated to the button styles. Also note that the topic actions at the bottom get too much padding when having topicinteraction in the skin path:

-- ArthurClemens - 29 Oct 2012 Hm, not over here. sigh. Long term those bottom topic actions should go away in favor of having all topic actions in the upper right corner, some of which in a drop down menu. 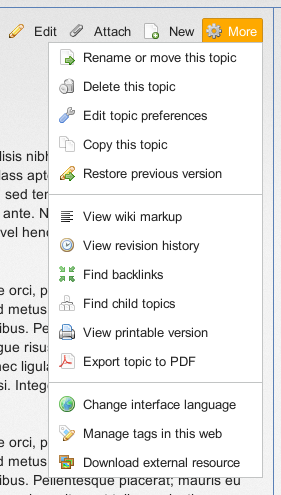 -- MichaelDaum - 29 Oct 2012 I totally agree. This is what I am working on: Base Skin dropdown in progress: 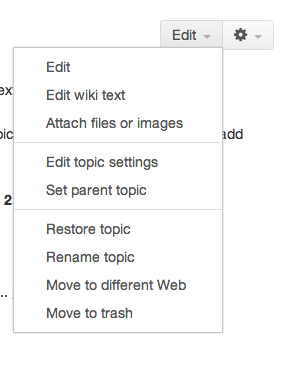 The whitespace at the left is room for icons. -- ArthurClemens - 29 Oct 2012 Some remarks on your menu: -- MichaelDaum - 29 Oct 2012 Here's a button test to compare your new pattern buttons with the default ones: http://trunk.foswiki.org/Sandbox/ButtonTest Some observations: -- MichaelDaum - 30 Oct 2012 We still have the bug that the jqButton with class foswikiHidden is displayed. Easy to fix though. -- ArthurClemens - 01 Nov 2012 Yes: remove the display:inline-block properties from pattern theme. They are part of the base css now since I switched JQueryPlugin's buttons to inline-blocks some checkins ago. -- MichaelDaum - 01 Nov 2012 Done. -- ArthurClemens - 01 Nov 2012 Found another error: does create some weird spacing in some places: compare http://trunk.foswiki.org/bin/edit/Sandbox/FoswikiFormStepsTest?t=1351778680;skin=natedit,plain to http://trunk.foswiki.org/bin/edit/Sandbox/FoswikiFormStepsTest?t=1351778681 The tabs at the top have an extra pixel white space. I find the white space at the top of the edit screen too much. The line-height in textareas is a bit too high: font-size:12px, line-height:20px. A resulting 18px (using line-height:1.5) would be better. -- MichaelDaum - 01 Nov 2012 The pattern theme not being used in edit mode is fixed as part of Item12214. -- MichaelDaum - 01 Nov 2012 Found another error: ui-buttons don't have an icon. That's because you did not copy ui-icons-famfamfam.png to your pattern theme as well. See http://trunk.foswiki.org/Sandbox/JQueryUIThemeTest They are there in http://trunk.foswiki.org/Sandbox/JQueryUIThemeTest?theme=foswiki It also demos the jquery.tabpane error. -- MichaelDaum - 01 Nov 2012 The gap below the tabs is created because the list items have height of 29px and the containing links are 25px. They are given 4px less because of the link top padding. But with box-sizing: border-box the height is exactly what you set - no padding calculation needed. This is generally an easier way to deal with sizes. It is supported in IE8 onwards. See also http://paulirish.com/2012/box-sizing-border-box-ftw/ -- ArthurClemens - 01 Nov 2012 Changing the box model needs intensive testing. Point is: we need to harmonize these fundamental layout properties across all of the project, not only in your jquery-ui pattern skin theme. A logical consequence is to deprecate use of IE6 and IE7 on foswiki ... which needs a discussion in the scope of a feature request. Put the other way around: as long as we did not decide on dropping support for IE7, we can't default to the box model you use in pattern skin yet. Or: how does IE7 behave on a page crafted for a border-box model? I'd expect it to ignore it and do its own legacy box model layout ... which might break things in unexpected ways, as we start seeing now in the case of the tabpanes. Or: Does it make sense to globally switch to the new box model and still work around IE7's layout differences diverging even more than normal? Note, the current way to work around the add-padding-to-grid problem discussed by Paul has been mitigated by the use of "contents" divs within layout elements similar to this skelleton: Any width properties are assigned to .main; padding goes to the inner .main-contents class; no padding is ever added to .main. This of course is more complicated markup than required in the new box model. Yet I see it in use by PatternSkin and I've adopted it in NatSkin. It is compatible across all browsers and all box models. I do see the benefits of changing the box model, even to simplify the skins' markup significantly. Yet there are some consequences that have to be considered for all of the rest of the project. This clearly is out of scope for 1.1.6 and 1.2.0. For now, we have an error in tabpanes being rendered with pattern's jquery-ui theme: there are a few pixels off. That's why I'd suggest to: -- MichaelDaum - 02 Nov 2012 After some investigation on the tab heights, I can't see how to resolve this on both box models: the current tab's height either adds it's top padding to the height (old model) or does not (new model). In the latter case the tab is not high enough to look attached the pane content. I can't even add a pattern prefix to some specific workarounds as old and new pattern skins have different box models. -- MichaelDaum - 02 Nov 2012 I haven't covered the tab panes myself completely yet, but will spend some time this weekend. -- ArthurClemens - 02 Nov 2012 The fix within pattern is simple: just add the top and bottom padding numbers to the height, that is it has got a top padding of 4 and a height of 24, makes the requried 28 in old model; up the height of the .current tab to 28 and the pixel gap is gone. But please also consider my more general remarks above on changing the box model. So that we don't need skin specific css in plugins. Otherwise you'll end up having to override each and everything in the skin's css, which basically is what you are doing now. Better would be to harmonize the basics related to layout, floating, box model, etc, so that you don't have to on that level of css. -- MichaelDaum - 02 Nov 2012 I agree more harmonization is needed, which should lead to less overrides in skins. BTW I noticed on the jquery-ui test page that you provided that the jqTabs button labels are smaller than the jquery-ui ones. Is it caused by an override? -- ArthurClemens - 02 Nov 2012 No, that's because the jqTabs are locked to 12px font-size, while the jquery-ui ones are 14px inherited by the global font-size settings. Btw, superfish menus break with box-sizing: border-box. -- MichaelDaum - 02 Nov 2012 I am going to revert the changes in release branch. Too much has changed for a patch release. -- ArthurClemens - 02 Nov 2012 Until no obvious glitch shows up, I think we can close this task. -- MichaelDaum - 15 Mar 2014 If you find this topic by searching for button presentation problems like this one (discussed above):

You may discover (like I did) that this issue is fixed in 2.0.0 and that 2.0.0's PatternSkin is not compatible with 1.1.9. Fortunately, the fix is simple: Make the JQUERYPLUGIN::THEME css dependent on the JQUERYPLUGIN::BUTTON css. https://github.com/foswiki/distro/blob/Release01x01/JQueryPlugin/lib/Foswiki/Plugins/JQueryPlugin/Plugins.pm#L150 shows the place where the change must be made. Add JQUERYPLUGIN::BUTTON to the list of dependencies. The resulting code looks like this: -- MichaelTempest - 07 July 2015